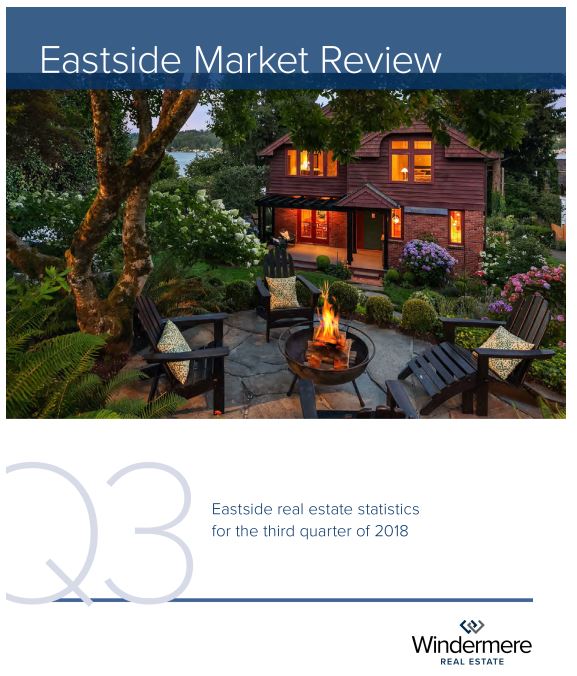 There are no major surprises to the latest sales numbers for Seattle’s Eastside communities from Renton to Bothell; East of Lake Sammamish to Kirkland & Lake Washington. Prices are mostly up, modestly in most areas but a few with price reductions over 2017 prices. Inventory levels have doubled their 2017 levels and the sales pace has varied from stable or slightly higher to as much as 25% off 2017 levels. That said, sales pace has been above the 10 yr average in all areas. With the winter season upon us, it’s likely we’ll see continued slowing in the pace and flat to lowering prices.  With the amount of economic growth in our overall region and the Eastside cities in particular, these numbers are “the break” in the market that most buyers have been asking for since 2015. Inventories typically decline as we get further in to winter but I expect we’ll see a quicker bounce back up in homes for sale after the New Year. Let me know if you’d like more specific market details on areas of interest to you.

Take a look at the numbers and some of the Giving Back that Windermere has done in 2018 and some of the stats that show Windermere is still the most respected and dominant real estate company in our region. I’m grateful to have called it home since 1989.

Related Articles
In The News Where Is Our For Sale Home Inventory? Some of us likely remember the Johnny Carson show and his banter with his audience of “how crazy is it….” Well, it’s pretty crazy out there. Likely many of you also saw the skit on Saturday Night Live a couple of weeks ago spoofing Zillow searches for homes as today’s dating or other unusual website […]
In The News Market update for August 2018 While the headline stories seem cataclysmic, the reality is still that we are seeing a shift from our escalating home values. We’ve come off the peak numbers by 3-5% but much of this is from buyers bidding over the asking prices. Where list prices were and where they are today are only 1-2% different. Home […]
In The News Market pace continues to rise Most of the local real estae market continues to thrive with price recovery in almost all areas strengthening to near or even above our economic recession data. February saw an increase in listings but that was matched with an increase in sales. While the statistics say we have higher inventory than last February, that's not matched […]